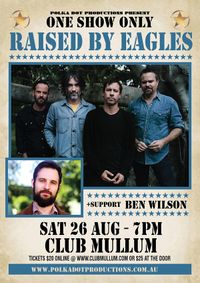 It’s hard to believe it’s barely been 4 years since Raised By Eagles played their first live show. With 2 acclaimed albums already under their belt – their eponymous 2013 debut and 2015’s Diamonds in the Bloodstream – the Melbourne band have just released their third album, I Must Be Somewhere. Fans of Americana – a label which embraces many “roots music” genres – will love what RBE do. They already have many fans in this area following brilliant shows at MMF.

Book your tickets for a great night of live music