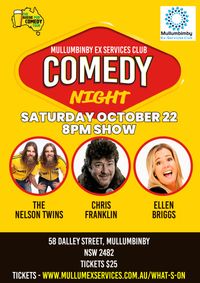 Come and join Chris “The Bloke” Franklin, The Nelson Twins & Ellen Briggs on Saturday October 22 at the Mullumbimby Ex Services Club. Chris Franklin is a legend of Australian comedy, reaching the top of the charts with his hit comedy song “bloke”, a bogan parody of the Meredith Brooks song “Bitch”. The Nelson Twins are Australia’s first ever identical twin comedy act, hailing from the small town of Walbundrie in NSW. Chris and Justin share the hilarity of being twins that look the same; yet are so very different. Ellen Briggs, needs no introduction as she is a local legend. Ellen is a proud Mullumbimby resident and well know for her role in the hilariously popular “Women Like Us” comedy show.