What happens when you mix comedy hypnosis with a hen’s party? Mayhem! You'll cry with laughter and cough up your cocktails as Wayne makes his willing volunteers do some highly unusual stunts!

With a little help from his verrrrry sexy topless male models, he transforms participants into sex therapists, karaoke stars, Victoria's Secret ramp models and so much more.

Wayne Donnelly is a master hypnotist and has been running his comedy show for ten years in Australia. Now he launches Girls Night Out, a special twist on a hen’s night celebration and with the help of some of his sexy shirtless friends, he unleashes his hypnotic skills onto willing volunteers whom he gets to perform a series of funny, risqué and downright cheeky activities. 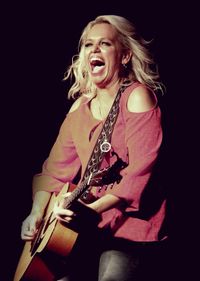 For over 25 years, Beccy Cole has been delighting Australian music fans with her unique brand of true entertainment. The South Australian star’s glowing warmth, husky tones, bawdy sense of humour and hundred-watt smile have helped make Beccy one of the nation’s best-loved and most celebrated artists.

With eleven Golden Guitars [Country Music Awards of Australia] to her name [including five for Female Artist of the Year] as well as multiple ARIA Top 10 Country and Top 40 Mainstream albums, a Top 10 DVD, three gold-certified releases, and more than a dozen No.1 Australian country singles, Beccy Cole is one of Australia’s most successful singer-songwriters. She is also a most sought after live performer, having a reputation for bringing an audience to fever pitch and quite often, stomach clutching laughter! 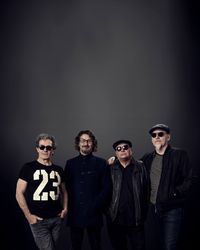 Any utterance of Australian pub rock and you can’t go past Choirboys… a staple of Australia’s rock n roll landscape since their inception in 1978. Over 40 years on, their songs are still as relevant as ever and none other than their seminal rock anthem, Run To Paradise.

With the Covid-19 outbreak in 2020 that confined people to their homes, and forced the hand of musicians like Choirboys to adapt, they ventured from loud, sweat driven and gritty pubs to live-streaming a set of Easy Beats and Choirboys classics to the very lounge room of their fans.

“’Home Free’ was sent to us initially from a fan,” said Ian Hulme. “Mark and I played it for the first time some years ago during a radio interview and it was recorded… years later that recording landed back in our laps and we decided to re-record it for ‘Feels Good’.”

In 2022, the band will be hitting the road for a very select few dates to celebrate its release and bring with them all the glory that fans come to expect of a Choirboys show: the grafting, sweating, pulverizing, pounding, screaming - doing what they do best. Choirboys are renowned for a great live show. It’s not just the music, it’s the atmosphere and the humorous banter they bring. Entertaining an audience by spilling their hearts and souls onto the stage. TheClothesLine.com.au says of the band: “[Mark] Gable is still belting out an incredible rock vocal and the band locked together for a tight and powerful performance. Choirboys presented earnest and comical entertainment with discernible values steeped in Aussie rock and roll.”

Choirboys’ history is enduring and vast. They’ve lived the true rock n roll dream. They signed their first recording deal with Alberts alongside stablemates AC/DC, The Angels, Rose Tattoo and a bunch of other 70’s stalwarts. They’ve released three top 30 albums and have charted in overseas territories including New Zealand and the US. They continue to be a constant on the East Coast touring and festival circuits.

You just don’t get much more Rock ‘n Roll than that.

Dreams returns to Mullumbimby in 2022 after their sellout 2020 shows!

Bring your wild heart and that gypsy heart inspired by the mystical one herself Stevie Nicks. You will re-live one of the legendary bands and performers of the seventies and eighties, and one band Australians love - Fleetwood Mac and Stevie Nicks. Featuring a well oiled & talented group of musicians dedicated to the task of bringing this era, this sound to the stage for all to enjoy.

For more on DREAMS visit www.dreamsshow.com.au

Wayne Vitale delivers the Bowie vocal like no other, staying true to Bowie’s on-stage personas and respecting one of the best voices ever recorded. With over 3000 live performances across Australia and Overseas with numerous Bands and Tribute Acts, Wayne’s musical talents are showcased in “The David Bowie Show”.

Visually “Ziggy Stardust” comes alive, and so too does “Aladdin Sane”, “The thin White Duke” and the “New Wave 80’s Bowie”, with Classic Costumes and Make Up from each period.

“The David Bowie Show” grabs the heart and soul of this ever-changing artist and takes a supernatural journey through “Sound and Vision”.

Killer Queen Lead Singer John Blunt, original member and Freddie Mercury Impersonator for over 15 years, cementing John as the most recognized Freddie around the globe.

The Band - Wayne Vitale Bass Guitar (John Deacon), Kevin Shilling Drums (Roger Taylor) and Andrew Edwards Guitar (Brian May) form the complete Queen line up portraying their opposites in Costume, Replica Instruments and Harmonies all Live on stage. It has taken numerous band member changes to “perfect” the “perfect” line up that is now the right Queen chemistry. The 2- hour live show consists of all Queen & Bowie's Greatest Hits.

FRIDAY 12TH AUGUST 2022 8pm 18+ Only Show Pre sale tickets $35 via www.mullumexservices.com.au/what-s-on We are expecting this show to sell out fast so get in early to avoid disappointment. 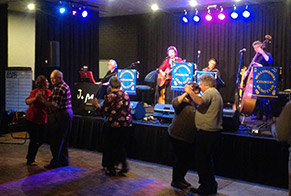 3rd Sunday of the month. FREE ENTRY
Click here for more info
Bingo For All Ages